The development of the LJ45 was announced by Bombardier in September, 1992, and first flight of the prototype aircraft took place in 1995, with the first customer aircraft subsequently delivered in January, 1998.  The cockpit is equipped with a four-screen Honeywell Primus 1000 EFIS avionics system. The aircraft is powered by two Honeywell TFE731-20 engines, a version developed specifically for this airframe. An internal APU provides ground power.

The Learjet 45XR is an upgraded version introduced in June, 2004, offering higher takeoff weights, faster cruise speeds and faster time-to-climb rates as compared to the LJ45. The increases are due to the upgrading of the engines to the TFE731-20BR configuration. LJ45 owners can upgrade their aircraft through the incorporation of several service bulletins.

Capacity: 9 passengers which includes one on the lavatory which is certified as a seat

IAS comments: The Learjet is a great performing aircraft with excellent operational costs. IAS can acquire a previously owned 45 and upgrade it to 45XR capabilities and appearance for a fraction of the cost of a new one.

Bombardier proudly announced it’s new Global series aircraft the Global 8000 and 7000 at this years NBAA (National Business Aircraft Association) convention. I was a little disappointed to learn that rather than a clean sheet Read more… 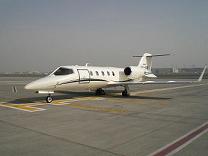 Six Things You Should Know About Selling Your Aircraft

This is an excerpt from: ” A Guide to Sales Success in a Challenging Economy; Six Things You Should Know About Selling Your Aircraft” that I contributed to. The entire guide is available for download Read more…